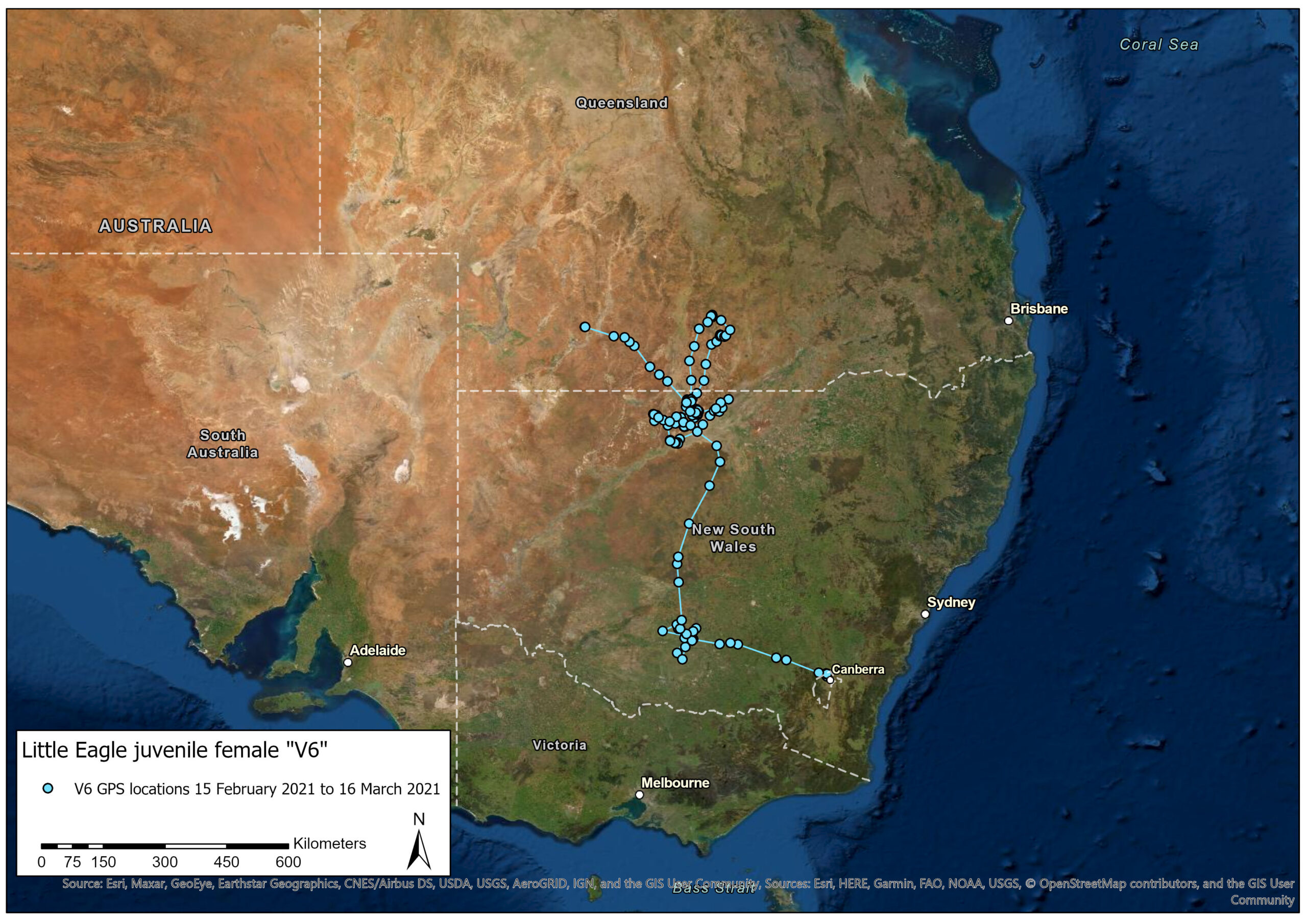 Adventures of the Ginninderra Little Eagles

While many have been in lockdown, not so the Little Eagles at Ginninderra, some who bred and some who undertook extensive journeys over the past year. Their story can be told thanks to satellite tracking of the birds through a multi-agency research collaboration including our CSIRO team.

The story starts with a pair of Little Eagles that nested and successfully bred on the northern part of CSIRO Ginninderra West in the spring of 2020. With the adult female already carrying a satellite tracking device fitted 18 months earlier, members of the Little Eagle Research Group were able to successfully fit both the adult male and female offspring with similar satellite trackers in mid-January 2021.

This meant that a whole family of raptors was successfully satellite tagged and tracked. The resulting plots (see below) from satellite tracking reveal the details of an amazing story.

A close-up of the tracks of the fledgling, known as V6, show a myriad of short flights of increasing length in all directions out from the nest in the protected box gum woodlands of Ginninderra West. By the end of January 2021, it seems she was ready for some teenage independence and to see the world. In any case she departed the ACT just days later on 15 February.

The adult male, known as Y4, apparently followed a similar route a day later, with both tracking west before swinging to the north.

The young female, V6,  flew to the Griffith (NSW) area and spent a few days around there before flying to an area between Brewarrina NSW and Boatman in middle southern Queensland.

Then the tracker for this adventurous young bird remained at one location in southern Queensland before it stopped transmitting altogether. There were prolonged heavy rains in the area at the time and unfortunately, she did not survive. Her body was recovered on a property 40 kilometres north of Thargomindah, by following the last recorded GPS location plots.

Meanwhile the adult male, Y4, passed over Griffith, then kept flying north,  and was tracked to Lake Yamma Yamma in outback Queensland. By April he had reached an area in the Northern Territory, near the Gulf of Carpentaria.

At this point you might be asking ‘where was the adult female, V4?’. Well for the first few months, she remained around the general nest area, moving around CSIRO Ginninderra and parts of Belconnen and Gungahlin.  Then, just like the previous year, she moved to an area on the fringe of the Fyshwick industrial area for her autumn and winter break.  We are not sure what attracts her to that area, but she has spent many winter days perched above rabbit warrens.

To cut a long story short, let’s see where things are up to now.

Currently the adult female, V4, is back at CSIRO Ginninderra and paired up again with, Y4, who returned  after a round trip of over 6000 kilometres.

And there has been an interesting development: another adult male, Z4, known from an area near Pegasus (Holt), has also been tracked to the Ginninderra site. He had been observed interacting with the adult female, V4, but is now with another female, untagged, about a kilometre away.

You can read more details about the Little Eagles at Ginninderra below. Please stay tuned for further updates. 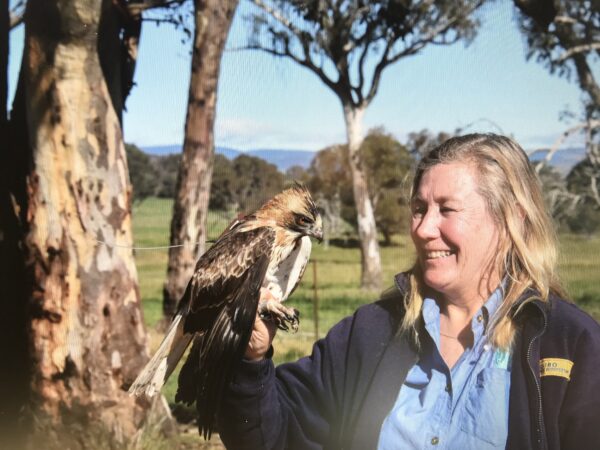 CSIRO’s Jacqui Stol with a Little Eagle male that had just been fitted with a satellite transmitter on the northern ACT border. 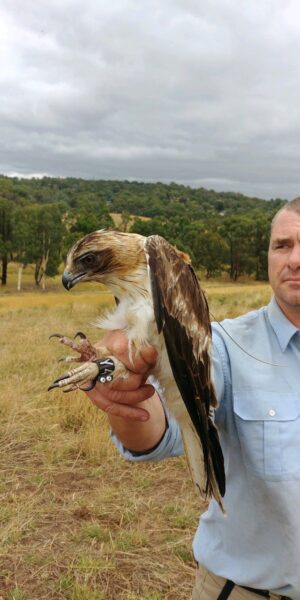 CSIRO’s Micah Davies with the adult male (Y4) Little Eagle at Ginninderra. The newly placed band is visible on the eagle’s leg. 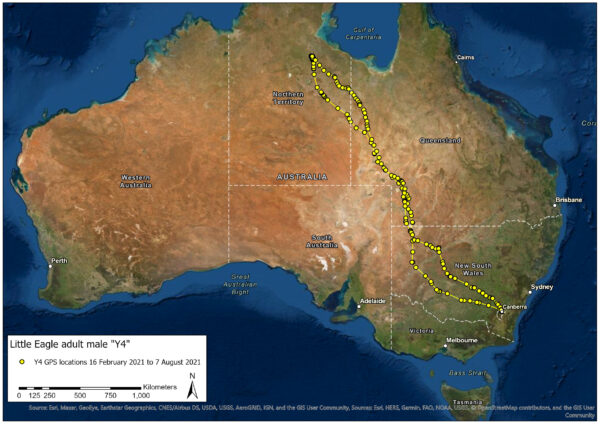 Dad – In autumn-winter 2020, The adult male Y4 trekked more than 6000 kilometres – almost to the Gulf of Carpentaria and back. 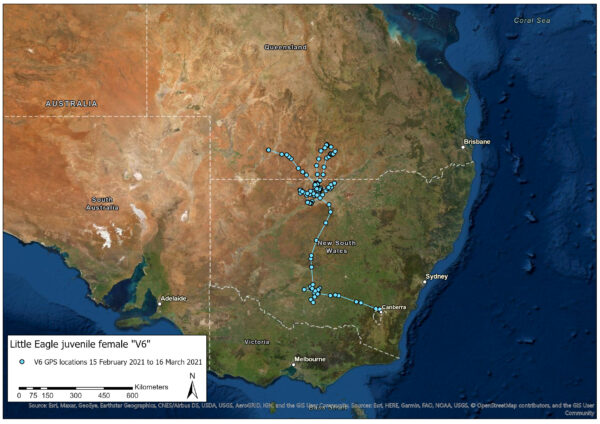 Daughter – In autumn-winter 2020, the Ginninderra juvenile female (V6) ventured west, to Griffith NSW, and then into northern NSW and Southern Queensland. 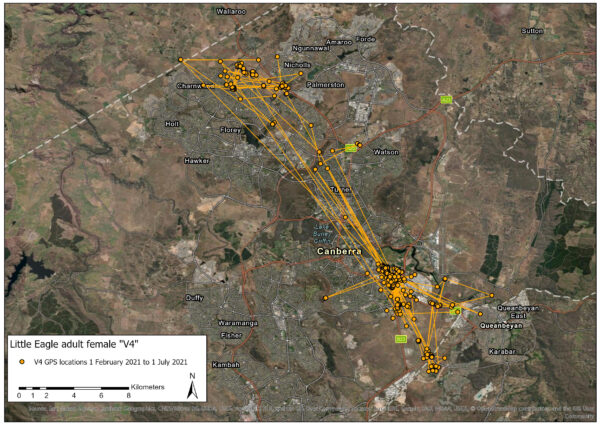 Mum – In autumn-winter 2020, the Ginninderra adult female V4 spent most of her time close to the nest, and in Belconnen and Gungahlin during the breeding season, before heading to Fyshwick for winter.