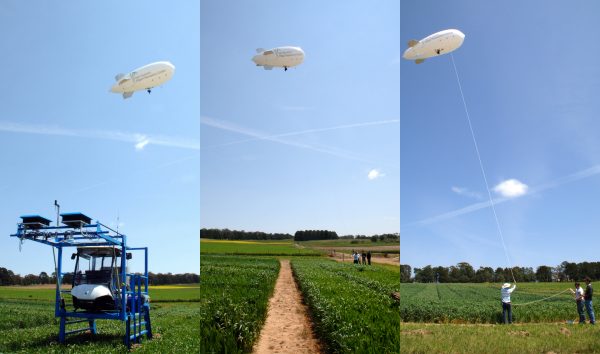 The blimp in action at Ginninderra. The Phenomobile is also pictured on the left.

Walking through the storage sheds at the Ginninderra Experiment Station, you would expect to find some interesting agricultural scientific equipment. What you might not expect to discover is a blimp.

However, like all shed items on site, the blimp has a story to tell. It’s part of a collection of items that also includes a ‘golf buggy on stilts’ or Phenomobile used to measure how effectively plants grow and perform under different field conditions.

The technology uses cameras that capture different light wavelengths and signals to photograph growing plants. The photographs created allow scientists to make measurements about the plants’ growth rates, their water use efficiency and how productive the crops are over the growing season.

Having lab and farm facilities on site allowed the scientists to develop the technology in the lab, then test it in the field. The Phenomobile can get above a row of plants without harming the crop and take detailed images. The blimp does the same and can photograph a whole paddock at a time.

Being able to measure the plant without disturbing the crop or destroying the plants means crops can be monitored throughout the growing season as the environmental conditions change. The performance of different crop varieties can be monitored during a drought to see which varieties preform best under Australia’s harsh conditions.

After being trialled, tested and perfected on the CSIRO site, (and surprising a few local residents), the equipment is now used to make measurements on the paddocks of research collaborators and farmers.

While there are now certainly smaller and more portable measuring tools, such as drones, that can fly over plants and crops, the blimp provided a steady platform for the development of the imaging and analysis tools that are used in photographing plants across large areas.

While the CSIRO blimp won’t be seen again in the Canberra skies, the technology it helped to develop continues to be used in farms across the country.