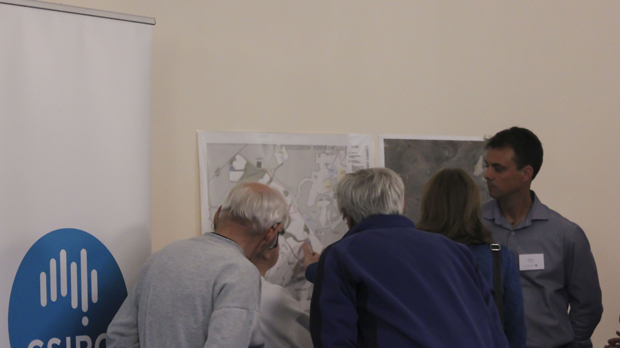 Exploring Ginninderra’s past, present and future

After more than half a century of dedicated scientific research, CSIRO’s Ginninderra Field Station is entering a new phase. Planning and engagement has commenced to deliver a new benchmark in liveable, sustainable and resilient urban development.

The Ginninderra Field Station was established in 1958 as a site for plant and agricultural research. This was in anticipation of the closure of the Dickson Experiment Station to make way for urban development in that area, which eventually occurred in 1962.

As with the Dickson site, the Ginninderra Field Station has now been surrounded by urban development and is no longer optimal for CSIRO’s agricultural research. In 2011 CSIRO started considering options for Ginninderra’s future use.

Rather than simply sell the property, CSIRO saw Ginninderra as a great opportunity to bring its research together to make a difference, not only for local residents and the ACT, but for other Australian cities, people, industry and the environment.

The sustainable urban development of Ginninderra presents an opportunity for positive social, environmental and economic impact for the ACT and Australia, while generating revenue for the reinvestment into CSIRO innovation and research infrastructure.

It’s a vision that has emerged through engagement with CSIRO’s science capability, undertaking environmental and heritage investigations, and initial conversations with the community, and one that will continue to evolve and bring lasting benefits.

CSIRO staff first met with ACT Government officials in July 2014 and have met regularly since then to discuss the possibilities for the potential development of the Ginninderra Field Station for urban use.

These meetings confirmed that the site presented an opportunity for greenfield development, which has been supported by the NCA’s response to the key issues considered as part of Amendment 86: ‘The CSIRO Ginninderra site presents an opportunity for greenfield development that can make use of existing infrastructure and services, and provides a more suitable alternative to cater for the growth of the city than other greenfield sites.’

CSIRO’s engagement with community groups, nearby residents and industry associations began in August 2015, coinciding with the land’s inclusion as part of Amendment 86.

This first round of engagement with the local community in September 2015 included three drop-in sessions at Gold Creek, Evatt and Charnwood and involved more than 220 people.  This is only the beginning, as CSIRO aims to involve more of these people and groups in the conversation about how we can design and work together for a liveable, sustainable and resilient urban area.

On 5 May 2016, classification of the Ginninderra Field Station to ‘Urban’ as part of the National Capital Plan was approved. This decision paved the way for CSIRO to seek Expressions of Interest (EOI) for a suitable development partner.

Following the closing of the EOI on May 23, CSIRO is evaluating and shortlisting suitably qualified developers, ahead of a Request for Proposal process later in the year.

CSIRO is excited about the opportunity to continue to work with the community, government, research partners, and other stakeholders, to create something unique at Ginninderra.

CSIRO is also committed to continuing the discussions with ACT Government agencies to harmonise with future planning goals and aspirations.

Future steps for the Ginninderra project include a site visit with conservation groups and workshop in June, community forum in July, additional community meetings in early 2017, as well as planning, approvals and detailed design in 2018. The earliest that any development could commence on the site is in 2019.

5 responses to “Exploring Ginninderra’s past, present and future”