CSIRO: a trusted contributor to the Canberra community

CSIRO has a long history of working in the Canberra community since opening its Black Mountain facilities in 1927. Since then, CSIRO has attracted world-class researchers to Canberra to collaborate on projects with industry, government, and research sectors within Australia and overseas.

The Black Mountain site has been a hub for research in agriculture and the natural sciences, with the Department of Entomology moving into its own building in 1934. The Australian National Herbarium was also established here in the 1930s. While CSIRO’s presence in Canberra began with Black Mountain, it wasn’t long before our research sites and facilities started to expand.

Research sites in Canberra have established and moved in response to the growing needs of the city and to accommodate urban development. Dickson was once a main hub for CSIRO’s agricultural research in Canberra. The Dickson Experiment Station operated from 1940 to 1962 before the research moved to CSIRO Ginninderra. Ginninderra continued to be a hub of CSIRO’s agricultural research station until the opening of the Boorowa Agricultural Research Station in late 2019.

The Dickson site provided much-needed land for urban development, as the ACT population almost doubled from 55,000 to over 90,000 in the five years between 1960 and 1965. Photos from the time show the rapid pace of development in Dickson and the surrounding suburbs once this land close to the centre of Canberra was repurposed. 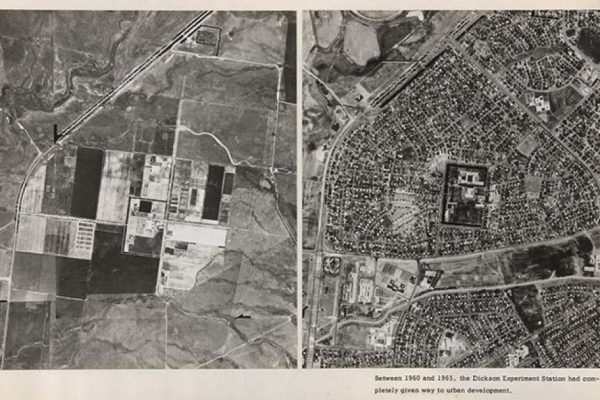 Before Dickson’s establishment as the main site, the very first site for agricultural research in Canberra was a 40-hectare site at Duntroon Farm, leased in 1926 to undertake research on the nutrient value of different stock feeds. This site became Canberra Airport in the 1930s.

In 1965 the Canberra Deep Space Communication Complex at Tidbinbilla opened and has worked with NASA on key space exploration missions ever since. CSIRO corporate headquarters are currently located at the Black Mountain site in Canberra.

The Gungahlin Homestead property at Crace was used by CSIRO for nearly 60 years for wildlife, ecological and sustainable ecosystems research.

Outreach to the Canberra community has long been a priority for CSIRO through public centres like the Canberra Space Centre and CSIRO Discovery Centre at Black Mountain. With hundreds of staff working in Canberra, CSIRO continues to be a major employer and contributor to the ACT economy.