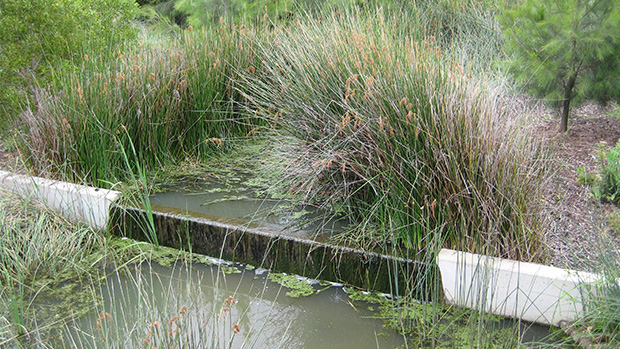 The future of stormwater at Ginninderra

The population of the ACT is projected to grow to half a million people by 2033.

With this urban growth and the changing climate we can expect an increased demand for water and the generation of more stormwater and sewage.

CSIRO is committed to sustainable urban water management and undertaking research that will help reduce the demand for potable water supply in our cities. This includes research on various aspects of reducing water use and making better use of available rainfall, stored and potable water and waste water streams.

CSIRO examined the feasibility of a range of stormwater harvesting and irrigation options in Canberra during 2007 to 2009, working with the ACT and Commonwealth Government’s on Phase 1 of the Canberra Integrated Urban Waterways Project.

The stormwater harvesting options that were considered included; use of existing lakes and ponds, the construction of new ponds, through to options that involved combining stormwater with water stored in aquifers or with reclaimed water.

This CSIRO research was used by the ACT Government to support the feasibility through to detailed design and construction of three pilot stormwater harvesting and reticulation projects, namely Inner North Canberra, Weston Creek and Tuggeranong.

The Inner North Stormwater Reticulation Network in the Sullivan’s Creek Catchment is Canberra’s first neighbourhood-scale stormwater harvesting and managed aquifer recharge system. Urban stormwater is captured and treated in constructed wetlands and then pumped though a reticulation network for irrigation of urban green spaces.

The ACT Government is currently trialling managed aquifer recharge as part of this Inner North scheme, which involves the injection of stormwater into a bore, where it is stored in underground aquifers and retrieved when required during peak irrigation.

CSIRO has considerable expertise in this innovative urban water technology, having recently completed a large study on Managed Aquifer Recharge and Stormwater Use Options (MARSUO) commissioned by the Goyder Institute for Water Research.

The aim of the study was to provide water managers and the community with the data needed to make informed decisions on stormwater harvesting and storage.

“Stormwater could be treated to a drinking water quality and not just used for open space, third pipe or industrial uses. The costs of doing this, however, are similar to the costs of conventional potable water supply,” said co-author of the study Dr Page

“Nonetheless, the MARSUO study shows that water quality/safety issues can be effectively managed in line with the National Water Quality Management Strategy”.

It is early days to consider stormwater options in the Ginninderra project, as we await the outcome of the land reclassification decision under Draft Amendment 86 of the National Capital Plan, which is required to consider the potential future urban development of the site.

Having said that, Ginninderra Creek and Halls Creek and their associated riparian areas are significant features of the Ginninderra site and the broader landscape.

“Ensuring the retention of adequate space for stormwater capture and treatment, providing green corridors along water courses, and implementing water sensitive urban design throughout the site, is all of paramount importance”, said Dr Page.

CSIRO researchers are currently investigating the water resource potential at the Ginninderra site and the types of stormwater use options. As noted in a previous update, one of these future uses will likely include the provision of water to support the cooling benefits of healthy vegetation to combat the Urban Heat Island effect.

As the project progresses, CSIRO looks forward to interacting with key stakeholders such as the ACT Government, Icon Water, and Ginninderra Catchment Group, as well as neighbouring communities and businesses, to discuss stormwater options.

One response to “The future of stormwater at Ginninderra”